Children in armed conflict are victims, entitled to protection 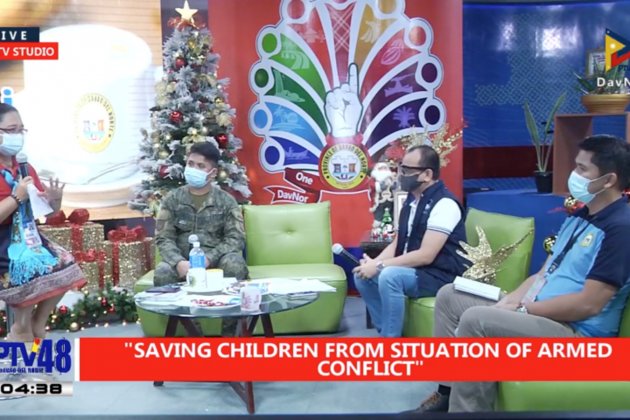 DAVAO DEL NORTE, Nov. 26 (PIA) - Children involved in armed conflict are seen by the law as victims and to be treated as such upon rescue or surrender.

During Kapihan sa DavNor yesterday, November 25, 2020, Renee Boy Binondo, Regional Sub-Committee for the Welfare of Children XI (RSCWC-XI) Regional Coordinator, said that children involved in armed conflict have rights as they are victims.

"Children involved in armed conflict are those in the field who were recruited as a combatant, lookout, cook, medic," Binondo said.

Lamosao cited an example when the NPA forced a child into rebellion.

Lamosao remembered that in this revelation, the child was ordered by [the NPA] to bring a pot up the mountain where the armed terrorist NPA members were waiting. Upon arriving, the food inside the child's pot, which was supposed to be for the child's family were all eaten by the terrorists. After the terrorists ate all the food, the child was told not to go back home.

"Kay kuno pag muna-og siya, torturon kuno siya sa military kay nakabalo na ang military nga kuyog sila sa NPA. So ang bata nagkaroon ug lahi nga paglantaw sa kasundalohan ug siya nahadlok pud. So gitagaan siyag pusil para protektahan kuno niya iyang sarili sa military (They lied to the child that if he came down [the mountain], the military will torture him because the military already knew he was with the NPA. So the child was brainwashed into fearing the military. The NPA gave the child a gun so he could protect himself from the military)," Lamosao recounted.

With this, Binondo said that these children have the right to survival, development and special respect aside from the right to protection.

"The right to survival and development, so kung ma rescue na sila, tagaan gyud dayun nato ug necessary needs nila ma medical mana, food or clothing. The right of special respect nga tao gihapon sila based on human rights nato nga convention and treated as victims (So if they are rescued, we will give them their immediate necessary needs like medical, food, or clothing. They have the right of special respect, that they are humans based on our human rights convention and are treated as victims)," Binondo said.

Concern but not alarming

However, Jeffrey Calamongay, Focal Person on Enhanced Comprehensive Local Integration Program (ECLIP) of Provincial Social Welfare Office (PSDWO) Davao del Norte, said that although the current state of NPA abducting children is a concern, it is no longer alarming.

"Ma consider nato siya nga concern, dili kaayo alarming tungod kay sa pag implement sa EO 70, atong mga kasundalohan, mga national government agencies, provincial offices, as well as PNP naa na jud sa community naga tabang na gyud. Naga implement ug mga projects related sa pag protekta sa mga bata as well as sa community. So naa lay mga concern because they are vulnerable, dali ra jud sila ma recruit (We consider it a concern, but not that alarming because with the implementation of EO 70, our military, the National Government agencies, the provincial offices, as well as the PNP are now in the communities helping. They are implementing the projects related to protecting children as well as the community. So we have the concern because they are vulnerable, they are easy to recruit)," he said.

Calamongay said that the PSWDO, in line with Special Protection of Children in Situations of Armed Conflict or RA 11188, is strengthening its prevention programs so that no children will get involved in or affected by armed conflict.

Facilities for children in armed conflict

According to Binondo and Calamongay, two facilities are currently being built (one regional and one provincial) for minors who are rescued.

These facilities are where the children will be given intervention, counseling, as well as financial package upon discharge and E-CLIP assistance if identified as involved in armed conflict.