What They're Saying: Arizona Cardinals 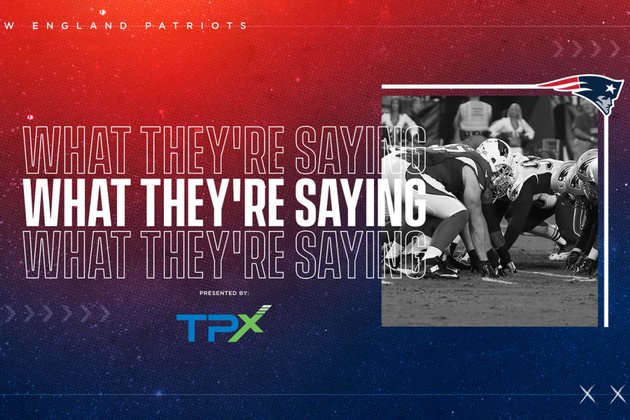 Arizona Cardinals players and coaches discuss their upcoming game against the New England Patriots this Sunday at Gillette Stadium.

On facing the Patriots...

"It's going to be a big challenge for us this week. Obviously, going against what most people consider the best coach, probably all-time in the NFL. It's no easy task especially going up to New England, but we just have to find a way to win a football game against a talented team and a well-coached team. I think we can do that if we just execute and find ways to worry about us and our game plan and go out there and do what we have to do."

"We all know what coach Belichick's done. It's been unmatched. The division titles and the run he's had there. He's the best coach of all-time. I don't think we'll ever see a run like he's had again."

"I never expected to be coaching against him. If you just start to analyze what he knows and what I know, we'd be in trouble. He's forgotten more football than I'll ever even try to comprehend. He's probably the one person in the NFL that can coach every position at an elite level, and that's not an exaggeration. That's how much he knows about the game. I'm honored to share the field with him, and it's going to be a heck of a challenge to go up there and try to get a win."

"I got introduced to him probably 12, 13 years ago and I've stayed in pretty good contact with him. I have a lot of respect for Coach as a man and as a Hall of Fame football coach. The greatest mind to ever coach the game."

"He is a big time quarterback. He's got some weapons there. He can beat you with his arm and his legs. That makes it an issue from a play callers perspective."

On the Patriots run game...

"We expect these guys to run the ball and put the ball in their best units hands and that's their offensive line right now. They're averaging like 160 yards on the ground, so we have to be fully prepared and make sure we are in our gaps and be a gap sound defense. We can't let the run game beat us. We have to stop the run and force Cam to throw the ball and the offense to put the ball in the air. We've got our work cut out for us because these guys are very, very solid in the run game. Those guys are power and downhill."

On the Patriots defense...

"From an offensive perspective, Bill (Belichick) is going to do a tremendous job of taking away what you do well. I think a lot of the focus is going to be on us eliminating those negative plays. If we have the same number of negative plays and penalties that we did last week, we won't have a lot of success up there, and our guys know that. A lot of the focus is on us improving in those areas and making sure we're playing downhill more this week."

On the Patriots offense...

"This offense is run first. They're averaging I think 164 a game rushing, so it's going to be a chore to slow them down as far as them running the football. Their passing game came alive last week against Houston where he [Cam Newton] threw for 300 plus yards. It's going to be chore."